THE GRASSROOTS MEET THE DECISION-MAKERS

On 22 November Speak Up for Libraries will be holding this year’s national conference on public libraries. It will bring together local campaigners, union members, library users and library workers - and give them a rare chance to talk directly to the people who make the decisions at national level. This is crunch year for public libraries, with a general election due and two major inquiries - on England and Wales - reporting soon.

Speak Up For Libraries Conference 2014 will have spokespeople from the three major political parties and the two report panels. It is vital that decision makers understand the real effects of their policies at local level. Already public libraries are suffering unprecedented damage. Government-imposed cuts to local authority funding have - too often - been unthinkingly applied to cut services, close essential local branches or pressure volunteers to take on services previously provided by expert staff.

The conference will be structured to enable people to network and discuss their ideas, before engaging directly with the speakers. 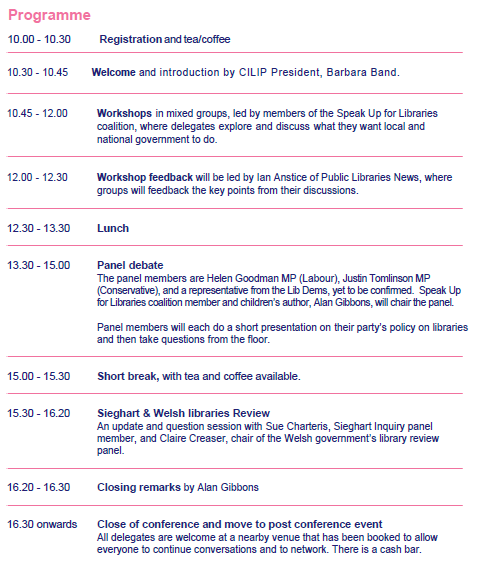 Full details are contained in the brochure, which you can download here. Speak Up for Libraries Conference 2014

Book your place online on our Eventbrite page.

All bookings include refreshments and lunch.

We are offering an Early Bird booking rate of only £20 per person  for those who book a place by 24 October.

If places remain after this date they will be at the full price of £25 per person.

And the hashtag for this event is #SUFLconf14

Since 1 April 2013, 693 professionally managed libraries (static or mobile) have already been lost in this way or remain under threat (out a UK total of c.4,265). Yet further damage is predicted as local authorities plan for further significant reductions in their funding.* This has major implications. Public libraries - especially small branches in deprived communities - are a vital resource for families, pre-schoolers, students, older people, benefits claimants, job seekers and all who need internet access, books, information and the essentials for citizenship. Properly staffed public libraries are irreplaceable, and cost very little to run.

One thought on “Speak Up for Libraries Conference 2014 bookings open”